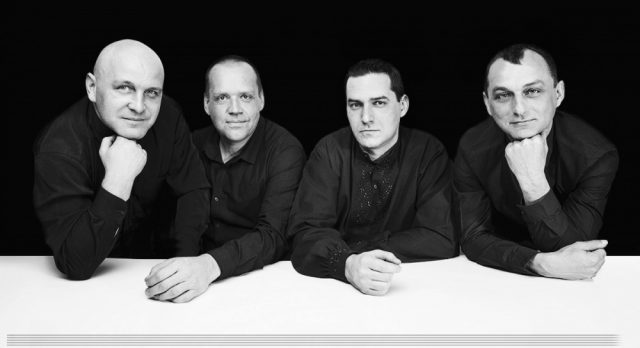 New edition of the legendary The Cracow Klezmer Band

Bester Quartet is a phenomenon on the global music market. The group is made up of four superior instrumentalists, classically trained musicians.

Bester Quartet is a phenomenon on the global music market. The group is made up of four superior instrumentalists, classically trained musicians. The quartet’s trademark is performance of the music of a vast stylistic range that assimilates some selected elements borrowed from classical, jazz and vanguard music, including the best of achievements of the contemporary chamber music where improvisation constitutes a foundation to build some unique instrumental forms on.
The ensemble is a new edition of the legendary The Cracow Klezmer Band that was formed back in 1997 in Krakow, Poland as an initiative of Jaroslaw Bester – a young musician, composer and accordionist. As a result of development of an original and artistically daring repertoire, based chiefly on own compositions or arrangements designed specifically for the instrumental setting, the quartet continues to win recognition among music critics and audience worldwide.
Bester Quartet has made numberless TV and radio recordings and has cooperated with many exceptional jazz, klezmer and vanguard musicians, including John Zorn, Tomasz Stanko, Grazyna Auguscik, John McLean, Don Byron, Frank London, Jorgos Skolias, Aaron Alexander, Ireneusz Socha , Tomasz Zietek and others. The quartet has performed in many prestigious venues around the world, including Poland, USA, UK, Taiwan, Russia, Czech Republic, Slovakia, Finland, Serbia, Italy, Estonia, Spain, France, Ukraine, Belorus, Moldavia, Romania, Hungary, Bulgaria, Sweden, Switzerland, Austria, Belgium, Holland, Germany and Canada.