We are sorry, the concert has been cancelled you can ask for refund your pre-sale service.

The band came together in 1996 for a weekly residency at the legendary downtown NYC venue The Knitting Factory and in 1998 released its debut, Din of Inequity. They followed up with 2000’s Solid Sender, 2001’s Sex Mob Does Bond, 2003’s Dime Grind Palace, 2006’s Sexotica, 2009’s Sex Mob Meets Medeski: Live in Willisau and 2013’s Cinema, Circus & Spaghetti: Sex Mob Plays Fellini. All showcased Bernstein as a remarkable arranger and interpreter, and Sexmob as a group with a wholly distinct style and method, yet one in line with jazz tradition. Bernstein explains: “Covers to me means you play it exactly like the record. I just take songs that I feel have a great melody and do them in my style. So I’ll pick a tune and tell the guys, ‘Let’s Sexmob this!’ And I realize that’s what jazz musicians have always done. That’s how Lester Young and Charlie Parker and Miles Davis got popular. They played the songs that everyone knew. And because they could recognize the song then that invited them into their style.”

The fact that Bernstein exclusively plays slide trumpet in Sexmob gives the quartet an even more distinctive edge. As he puts it, “When you play the trumpet, Louis Armstrong is the king. But when I play the slide trumpet, I’m the king. It’s my voice. On trumpet, there’s no escaping Armstrong and Miles Davis, Dizzy Gillespie, Freddie Hubbard, Woody Shaw, Lester Bowie…all those cats. But on slide trumpet, it’s just me.”

Bernstein showcases the wide-range of his compositional acumen throughout Cultural Capital. “Some of the tunes, like ‘Bari Si,’ ‘Step Apache’ and ‘Syrup’ are through-composed like Jelly Roll Morton pieces,” he explains. “And some like ‘4 Cents’ and ‘Street’ and are more jammy, where we take a little idea — a line or a groove — and just develop it.”

The rubato ballad “Helmland,” which features some particularly expressive slide trumpet work by Bernstein, carries a hymn-like feel while “Giant Minds” sounds like a requiem. Krauss and Scherr overdub guitars on “Valentino” and the raucous second-line groover “Golden Houses.” Krauss is featured on the free interlude “Lacy” and he’s turned loose on the edgy closer, “Briggan,” Says the leader, “Sometime it’s a little uncomfortable and jarring for people but that’s what Briggan does, that’s his thing. He’s a different kind of virtuoso.” Scherr is showcased on the African-influenced “Hear You” while “SF” pays tribute to Bernstein’s Bay Area roots. ”There were all these kind of psychedelic-blues hippie bands when I was growing up like Quicksilver Messenger Service, Sons of Champlin, The Loading Zone, Moby Grape. You’d hear those bands more than the Grateful Dead. So that’s what this song was about.”

Bernstein and his Sexmob crew continue to push the envelope in delightfully subversive ways on their fiercely independent, self-produced new outing, Cultural Capital, both a captivating continuation of their history while also a bold step into novel territory. 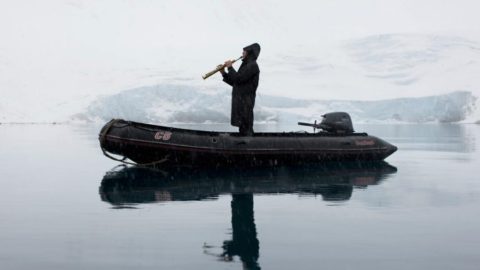