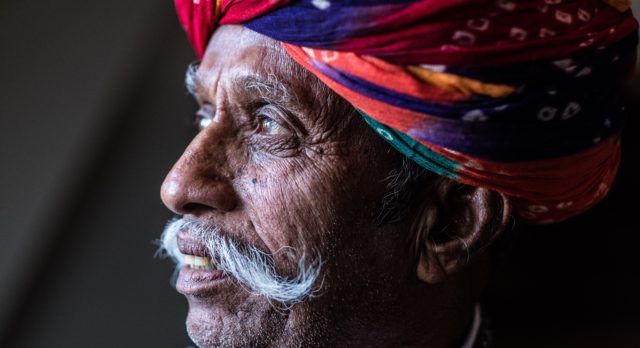 A living legend and the undisputed master of the sindhi sarangi

A national treasure, at 68 Lakha Khan is a Sangeet Natak Akademi award winner for his contribution to Rajasthani folk music, and perhaps the greatest exponent of the sindhi sarangi. Born in the village of Raneri in Jodhpur district, Rajasthan, India into a family of traditional musicians from the Manganiyar community, he was trained at an early age in rendering the compositions of the Multan school of Manganiyars.

His first public performances were in the late 60’s and 70’s in India, and under the guidance of the late ethnomusicologist Komal Kothari, toured Europe, UK, Russia and Japan through the early 90’s. He resumed international touring in 2013 with his first ever US tour, and now completed three US tours, and two European tours in Belgium, Denmark and Sweden. Today, Lakha Khan is one of the last remaining Manganiyars to have mastered this complex instrument and to carry forward the centuries-old musical tradition of Rajasthani and Multani folk and Sufi music.

His music is truly secular and straddles both the classical and folk domains, with a vast songbook that incorporates Meera bhajans, Sufi kalaams, popular Hindi tunes, and the ancient stories and oral histories of the region, spanning the western Indian sub-continent. He sings in over six languages including Hindi, Marwari, Sindhi, Punjabi and Multani. Bestowed with a powerful and melodious voice that perfectly compliments his instrument, Lakha Khan’s music transcends boundaries and invokes a spiritual oneness in the listener. He is accompanied by his son Dane Khan on the dholak – the double headed Indian folk drum.