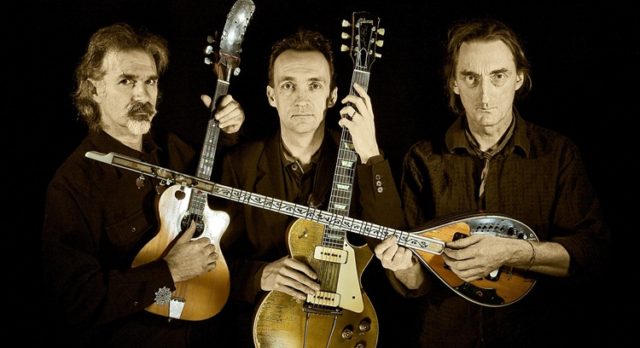 Why ‘Les Triaboliques’? Formed as a result of an inspired probe by record-company geneticist René Goiffon, Les Triaboliques somehow manage the impossible: to blend Justin’s desert-blues-soaked guitars with Lu’s Turkadelic saz and cümbüş and Ben’s mandolin/barizouki world-string-theories, amplifiers and vocal mikes at the ready.

The Desert, The Delta, The Steppes, The Underground. Crossing the stone bridge between dark city and dusk. On the creaking causeway, instruments on backs, rain on our packs. We smell the black earth. We are intent.

One the UK’s most original and inspirational guitarists. What a pedigree the man has: his pioneering work in the early ’90s with Jah Wobble’s Invaders of the Heart; his production on three albums by French band LO’JO and the whole event that is the Festival du Desert; producing 2 albums by guitar-poets Tinariwen, recording and touring with Sinead O’Connor & Natacha Atlas; co-writing an album for Real World with Ali Slimani, playing with Cara Dillon, writing the soundtrack for the film KIN. And since 2001 guitarist and co-writer for Robert Plant’s band Strange Sensations. Brought up in the Middle East, a fan of Mediaeval art, North African cultures, Delta blues and Jackson Pollock, Justin’s individual style has also led him to work with Brian Eno, Hector Zazou, Peter Gabriel, The Indigo Girls, Moodswings, Hukwe Zawose and U-Cef. In 2007 Justin embarked on another exciting project. An exploration of West African roots music and its relationship, and direct kinship to the blues and rock and roll. His collaborator is Gambian griot Juldeh Camara, master of the one-string riti violin. Together with Justin’s long-term percussionist Salah Dawson Miller this trio have now produced 2 sensational records, and tour regularly. In 2008 they won the ‘Culture Crossing’ prize in the BBC radio Awards

Lu started out in 1977 in the Summer of Punk playing with The Damned during their lost psychedelic phase. After making something of a name as a guitarist in the punk and New Wave scenes he wandered the world whilst also playing in Johnny Rotten’s PiL, The Mekons, The Waterboys, Shriekback and with the late great Kirsty MacColl. On his travels, musical instruments would follow him home and he soon got tangled up in folk, roots, world music, jazz, and free music being Uncle to the 3 Mustaphas 3, and godson to the legendary free saxophonist Lol Coxhill. He has been known to play various guitars, bass, piano/keyboards, Turkish saz and cümbüş (and some home-made variants: tarbüş, tenorbüş, bassbüş and violbüş) as well as Arabic mazhar and various other flutes & drums. While wandering the Siberian steppes with Tuvan throat-punks Yat-Kha he also found some throat singing. In recent years, Lu has been an active member of a number of bands, including Billy Bragg & the Blokes, the Mekons, the Blue Blokes 3 and with drummer Mark Roberts has also produced and performed with London-Pakistani raggamuffin songster Babar Luck (from King Prawn). His other current trio is the free-folk squeaky-bonky acoustic “anti-music” Raz3, a trio with Ken Hyder and Tim Hodgkinson of K-Space, Henry Cow and Talisker fame.

Born in Liverpool and living in London, the ever-curious and characterful multi-instrumentalist mondial Ben Mandelson is well-known as a leading freelance record producer working in all areas of world music. He was the co-founder and A&R manager / house producer for the influential GlobeStyle Records label in London. Next to his onsite recording experience absolutely worldwide, he was a core member of the influential proto-world-music godparents the 3 Mustaphas 3, and founding director of the premier world music tradefair WOMEX. In other lives he has been plectrum playing person for powerpop punksters Amazorblades, the legendary Magazine, african guitar stylist in Orchestra Jazira, was a Mekon for the day (aka Stoke Newington Jr), and many many sessions and collaborations.

Coaxed back to touring and recording by Billy Bragg, he is string-twanging member of Billy’s fabulous orchestra The Blokes, and has now been rehabilitated sufficiently to moonlight in Ceilidh-mobsters Tiger Moth, and with Lu in the Blue Blokes 3. He brings his string-filled quirky insight to brighten the mighty rivermud twilight sound of LES TRIABOLIQUES. 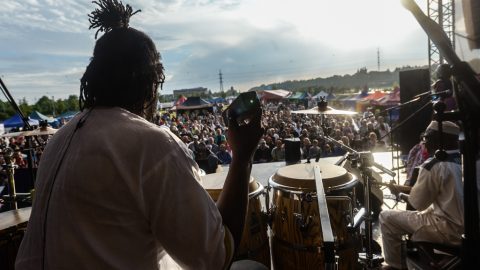